The Nemesis System was a major feature in 2014’s Shadow Of Mordor and was touted as being a system where the Artifical Intelligence in the game could ‘remember’ both the deaths of the Player and the Orks. In Shadow of Mordor the Nemesis System presented an interesting gameplay mechanic: If the player died to an Ork grunt, that grunt would see a ‘promotion’ and go from being a nameless grunt to a Captain of Saurons army, this promotion would give the Ork a name and a list of strengths and weaknesses. New captains could also be generated with a ‘Fear’ and/or a ‘Hatred’,  taking advantage of a Captains fear would cause them to flee the battle while triggering a Captains hatred would grant them a bonus to their abilities while also preventing them from fleeing. 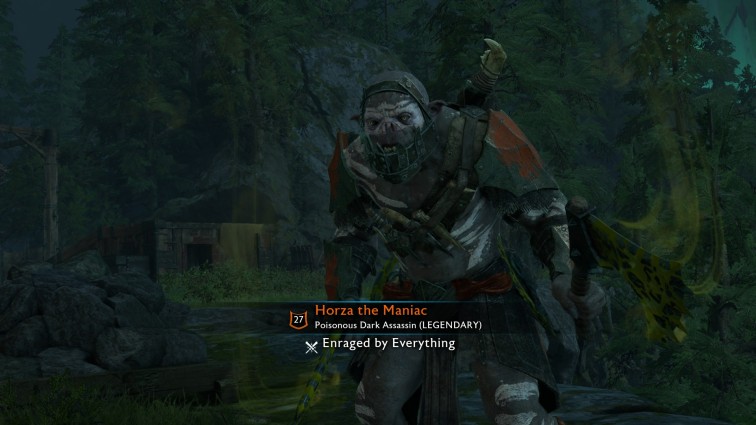 When I first heard about the Nemesis System, I was sceptical about whether it was accurate or not, however, one day I picked up Shadow of Mordor during a Summer Sale and, just as intended, I had Orcs climbing back out of the grave tooth-and-nail to have another go, however, after a while it got a little bit stale to only have an Orc Captain come back once and then finally get killed, but then it finally happened. I encountered Mozu the Scholar, who wanted to slay Talion (the player character) to cure an ailment which had ruined his face… Naturally, I killed him by burning him alive, but he came back, this time with a sack on his head, so I then decided to throw him over a cliff. Mozu came back again and as such, I dominated a nearby Graug and had it devour him. Of course, he somehow climbed his way out of the beast’s intestines and came back. It took another two attempts to finally put Mozu down for good.

Of course, then the final chapter of the game comes along and who is leading the charge for the enemy? Mozu, because of-bloody-course he is.

Three years later comes Shadow of Mordor’s sequel: Shadow of War and (despite its controversy regarding loot boxes) with it arrived a plethora of Nemesis system improvements, as now an Orc could come back after having their limbs removed with a peg leg or prosthetic arm, they could have all new appearances with brand new Hate and Fear categories, Orks can become blood-brothers and Rivals with other Orks. Shadow of War also made it so that Orks were no longer the only race which Talion had to fight as with them came the bigger, stronger Ologs and the Nazgúl. Shadow of War also brought with it a siege mechanic, where the player must build an army of recruited Orks & Ologs to storm and take over a hostile fort, during this time it’s possible for an Ork/Olog to betray Talion mid-siege or even save him, though these events can also occur outside of the Siege mode, just like it happened with me and one Maku. 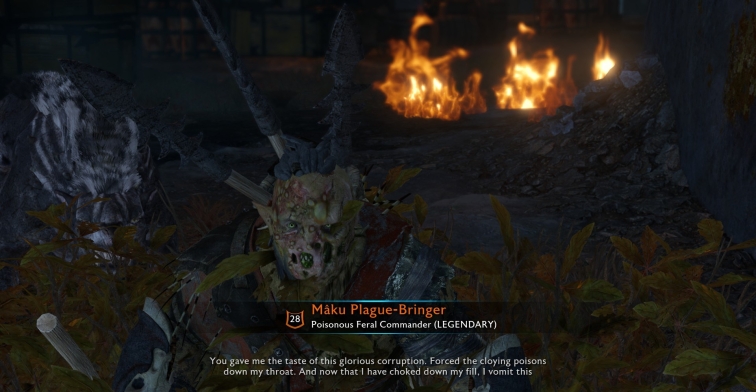 Unfortunately, I don’t have a screenshot of Maku before he decided to try and betray me and take control of my army, however, his face was originally in one piece, he had no scarring and was coated in green war paint, as were the gang of Orks and Ologs who served him. Maku, however, had a blood brother who decided to avenge his death, causing both of them to betray me, though only Maku has returned from the grave so far. This story isn’t necessarily going to be a series of events unique to me alone, but it the Orks involved and my history with them certainly makes it feel that way. This is, in my opinion, the greatest strength that the Nemesis System provides for its player, that sensation of dynamic give-and-take, action-and-reaction.

Orks and Ologs now no longer change after you slay them, they can learn mid-combat to counter a players playstyle. Rely heavily on vaulting over your opponent to strike them in the back? Now an Ork or Olog can learn to kick you back or throw you out of the way. Throw daggers to continuously stun a bothersome Ork captain? He’ll adapt and learn some way to dodge or interrupt the daggers before they can hit. The Nemesis System provides a process that, to me at least, seems very evolutionary in terms of how the AI in a game can interact with the player.

The Nemesis System has proven itself to be rather popular among critics and players, but there’s one question I find myself constantly wondering:

Why Middle-Earth? This is my biggest problem with the games and it’s not even an issue about the Nemesis System itself. From my perspective, as someone who isn’t a fan of Tolkiens world, everything outside of messing around with Captains and Warchiefs like some kind of demented pokémon trainer feels rather bland or uninteresting, however, in an interesting turn of events, I can’t think of another setting where the Nemesis System could reasonably work. It’s a strange position to find myself in with this system, as it presents players with a fantastic tool to tell stories to other players and friends but also provides an interesting series of mini-stories around the player and their army.

If you enjoyed this article and would like to see more from me in the future, please consider buying me a kofi! though you are by no means obligated nor expected to do so.